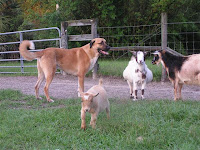 Moose is back home with his Nigerian dwarf goats, Babydoll sheep, horses, chickens and cats, and especially back with his family, the Currans of High Springs, Florida. It has been an exciting year for Moose, his family, his co-owner and his breeders. This amazing dog has done his time and shown his worth in matching the breed standard for the Anatolian Shepherd Dog, now he is home and doing what he loves the most. It is a time for destressing and getting back to basics for him. 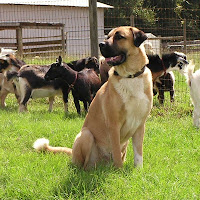 In a total of 65 shows in one year of showing, Moose has 42 BEST OF BREED wins, a Group One and a Group four. He won the 2007 National Specialty Show exactly one week after he turned two years old, he qualified for Eukanuba, finished 2007 as AKC's #2 Anatolian, and was invited to the 2008 Westminster show. That's an amazing year for basically a puppy!! 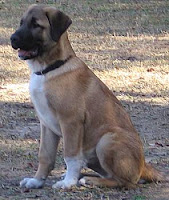 There may be the occasional dog show here and there, but the most important thing is that Moose has nothing to prove when it comes to strutting his stuff in the show ring. He has more than proved he is fit to join the ranks of other outstanding Anatolian Shepherd Dogs!!
Posted by Alaturka at 8:17 PM

Congrats to you for all of the successes you have had in 2007. I hope 2008 will bring you more of the same, it is well deserved!