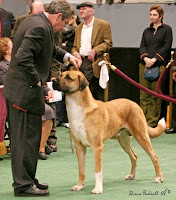 This will be only the second time a dog I bred has ever been invited to go to Westminster in New York city for the big event held every year in February. The show is televised and all the dogs that win their breed get to have their minute in front of the camera in the Group ring. It is a very exciting and very exhausting experience. This year Moose was invited as AKC's #2 Anatolian for 2007. Normally, we would not have considered this, but since we had decided that Moose needed to get back to what he really loved, being a Livestock Guardian, we thought this would be an important show for him to go to. So off to New York City with Gary Sheetz, his handler for this show. The first day of the show we watched as dogs in other groups strutted their stuff and vied for their chance at a group placement. On the second day, we found out that Moose was not awarded Best of Breed and would not be seen in front of the camera in the Group ring, but he did take the only AWARD OF MERIT for our breed. We were very excited. Moose had already done more than we ever expected in just one year of being a show dog and we were very happy with AOM he was awarded by Judge Beverly Capstick.
Posted by Alaturka at 8:05 PM