TWO OF MY EARLY DOGS

As an owner of Anatolian Shepherds for nearly 20 years, it has been my great pleasure to have lived with some very nice examples of this ancient breed!!

Here is my second Anatolian, Sagi (pronounced "Sah Gee"), with one of the many 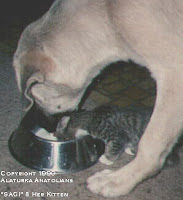 kittens that have been abandoned on our property over the years ... to say that Sagi was a good babysitter is putting it mildly to say the least. It is amazing to me to go back and remember all the times this girl stepped in and took over the care of these little guys.

I guess my fondest memory is at dusk one day when Sagi was laying out in the yard with three new very small kittens ... Sagi was stretched out, supposedly sleeping, when an owl came down from a tree after one of the kittens.

Sagi went from fully stretched out laying down to full protective mode in the blink of an eye. The owl didn't stand a chance ... and Sagi's kittens were safe!!

Sagi was a beautiful apricot fawn and one of many top show dogs that I have had over the last 20 years, earning four championship titles in less than a year and retiring as ARBA's #1 bitch.

My first Anatolian, Murgatroid, a silver fawn male with a black mask, came to live with me in October of 1987. Murg was my "Heart" dog (had total control of my heart) and was my best guardian dog.

Murg was a sweet gentle dog, but could be very serious when he felt his "flock" was being threatened. He loved children, and I cannot begin to count the number of stray puppies and kittens he "rescued" over the years, making me bring them back to the house and care for them until they were healthy enough to go to new homes.

Over the 11 years that I was privileged to be loved by this dog, he showed me over and over what Anatolians are all about -- Nobility - Loyalty - Love (especially "LOVE"). I shall be forever grateful that I had the opportunity to know such a dog.